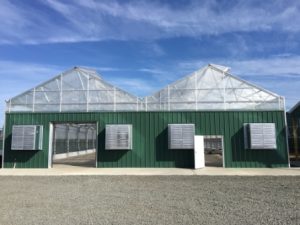 A cannabis plant’s flowering cycle is triggered by its photo-period. In other words, the length of time a cannabis plant receives light in a 24 hour period directly influences the plant’s hormone production and can trigger the creation of flowers or buds. Marijuana’s photo-sensitivity is why indoor cannabis growers use a 12 hour “lights on” and a 12 hour “lights off” photo-period during the flowering stage of growth. It is actually the lengthening of the dark period that prompts a cannabis plant to enter the reproduction stage (flowering stage). Marijuana’s natural response to the photo-period is the basis of a gardening technique which is becoming increasingly popular among greenhouse cannabis cultivators. This gardening technique is termed light deprivation.

What is Light Deprivation?

Unlike typical shade cloths that only reduce the amount of light entering the greenhouse, the outer covering material used for light deprivation is designed to shade as much light as possible. In order to make the interior of the greenhouse as dark as possible, the shading material used for light deprivation needs to cover the entire greenhouse structure. Each day the shade cover is removed for the desired amount of light hours. After reaching the desired length of light hours, the shade cover is manually or automatically put back on the greenhouse. 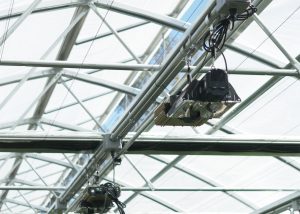 The biggest difference between light deprivation greenhouses and the way they operate is whether the shade material is manually or automatically removed or moved into position. With a manual light deprivation greenhouse, the shade cloth must be manually positioned over the greenhouse structure. As can be imagined, this can be quite difficult with large structures. Growers usually rely on some sort of rope and pulley system to aid in moving the potentially heavy shade material. Aside from the physical labor involved, the biggest disadvantage of a manual system is that someone (usually the grower) must be present every day for both the covering and removal of the shade material. Forgetting just once can cause problems for a grower, including out-of-whack atmospheric conditions or stunted growth due to quickly alternating photoperiods.

An automatic light deprivation greenhouse is one equipped with a motorized system for covering and removing the light deprivation material. These systems are typically equipped with a small electric motor. These motors can be wired for use with a chain of car batteries to operate in locations without access to electricity. Automatic light deprivation systems offer huge savings in labor and also allow a marijuana grower to use a timer for the system’s motor. With the timer, a grower can automate the system and does not have to be present every time the covering is removed or put back on the greenhouse.

There are some major advantages of using light deprivation for cultivating marijuana, including more control over the harvest time, multiple harvests per growing season, higher quality, increased yields, and a reduced chance of failure.

As with many things in life, timing is everything. A light deprivation greenhouse allows a grower to control the time of flower initiation and, in turn, the time of harvest. This could be advantageous for many reasons, but one reason in particular is the ability to harvest cannabis at a time of year when other growers still have their plants 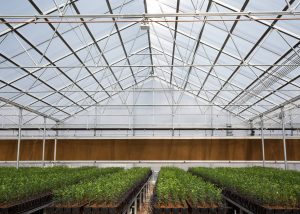 Many growers using light deprivation believe that the (relatively) smaller outdoor plants produced in their light deprivation greenhouses tend to produce higher quality buds than the typical monster outdoor plants. This is because the smaller plants are much less likely to suffer from bud rot, powdery mildew, or other types of molds that find the moisture pockets of large flowers conducive to growth. Many light deprivation growers also believe splitting up the growing season into two harvests of smaller plants increases the overall quality on average.

The lower likelihood of molds also makes the marijuana more marketable; especially when considering the fact that quality control testing of marijuana is becoming the norm for most dispensaries.

Although each individual harvest is smaller than a typical outdoor harvest, the overall yield for the season will end up being the same or even larger. An increase in overall yield can be attributed to the fact that the first set of plants is flowering under the July sun. This means stronger, more direct sunlight with a higher level of UV light. In addition to the intense July sun, a light deprivation greenhouse lets a grower flower one crop while another crop is in vegetative growth.  As soon as the first harvest is complete, the vegetative plants can be put into the light deprivation greenhouse to begin flowering.

By breaking up the outdoor season into two harvests, a cannabis grower can reduce the chance of utter failure. Since he or she will have two harvests, the grower will not experience a complete loss if there is a catastrophe, such as a heat wave or a pest insect infestation. In other words, if one crop is ruined, a grower will still have another crop to help negate his or her losses. 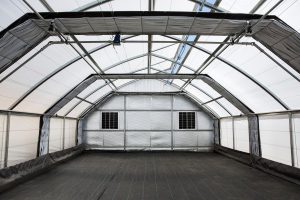 Light deprivation is a technique that will continue to revolutionize outdoor cannabis cultivation. Marijuana growers with the desire to set up an outdoor growing facility should seriously consider a light deprivation greenhouse. Even a grower with an existing greenhouse may want to consider retrofitting his or her operation

Images for this article were provided by Greenhouse Megastore.