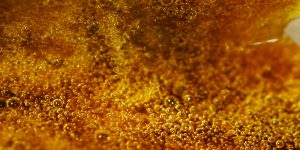 Extracting without a Solvent (Non-Solvent Extracts)

Generally speaking, a cannabis extract made without a solvent is less potent, but is also much less dangerous to produce. For example, screening for kief is something that just about any cannabis consumer can do. There are even automatic kief tumblers that eliminate most of the labor associated with the process. Another non-solvent method includes subjecting the cannabis flower material to high pressure and heat to extract “rosin”. In addition to kief and rosin, other non-solvent extracts include finger hash and ice water hash (bubble hash). 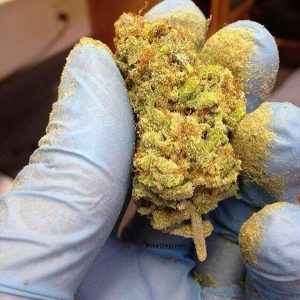 Finger hash is a term used for hash made from the sticky rosin that accumulates on the cannabis processor’s fingers and hands. Collecting finger hash is arguably the simplest cannabis extraction technique. During harvest, sticky rosin binds to the fingers and hands of the harvester. He or she can remove the rosin and then press it into a hash-like substance. Growers who use latex or rubber gloves during harvesting can place the gloves in the freezer to make the rosin easier to remove and collect. In some cultures, finger hash is made when cultivators deliberately rub their hands on the flowers and leaves of the cannabis plants during the flowering stage of growth. The rosin is then collected from the cultivator’s hands and pressed into hash for consumption.

Kief is made by sifting the dried cannabis material. Dry sifting can be done by hand or with a machine (kief tumbler or pollinator). Dry sifting involves shaking or moving the dried flowers and/or leaves across a 120-150 micron screen. The trichomes break away from the plant material, fall through the screen, and are collected. Once collected, the kief can be consumed as is or pressed into hash.

Strictly speaking, ice water is the solvent used in this extraction method. However, using ice water for extraction is extremely safe and there are no potentially harmful residuals left behind by the “solvent”. To make ice water hash, the plant material (usually fresh, but dried can also be used) is mixed with ice water to get the trichomes cold. A series of bags, each with a different size mesh bottom is placed in the holding container before mixing begins. Many processors use a five gallon bucket, a plastic garbage bin, or some other non-permeable holding container. After vigorously mixing the ice water to remove the trichomes from the plant material, the bags are lifted out one at a time to strain the plant material. The first bag with the largest size screen is removed first. This bag will contain the majority of the plant material. The other bags are lifted in order. The final bag in the series has the smallest size screen and will contain the highest concentration of THC and other cannabinoids. The extract collected from each bag can be dried and sorted by grade (the smallest size screen will have the highest potency). Once the extracted hash has dried completely, it can be enjoyed like other hashes.

The most exciting non-solvent cannabis extract to hit the market is rosin. Rosin is a solid form cannabis extract made by applying pressure and heat to the cannabis flowers in order to vaporize volatile liquid terpenes. Essentially, rosin is made when the cannabis material is put under extreme pressure, while also being heated to a desirable temperature (somewhere between 250-335 degrees F). Rosin has a similar potency to many of the popular solvent-based extracts, but without the potential dangers associated with the solvents during processing or as residuals. For these reasons, rosin is steadily growing in popularity among processors and consumers. Rosin is also significantly less expensive to produce than most solvent-based methods, making it even more appealing.

Extracting with a Solvent

Extracting cannabis with a solvent can include many techniques and various solvents. Advanced chemical solvent extraction methods involve sophisticated equipment, such as a closed- or open-loop extraction system. Chemical extraction methods can use butane, propane, ether, lab-grade naphtha, CO2, or dry ice as the solvent to extract the cannabinoids. Products associated with solvent-based extracts include butane hash oil (BHO), shatter, wax, Rick Simpson oil (RSO), supercritical CO2, and cannabis distillate. Many of the solvents used for cannabis extractions are extremely flammable and/or dangerous to consume. This is why most solvent-based extraction methods are best left to the professionals who have the proper knowledge and equipment.

Butane hash oil (also known as butane honey oil), or BHO, is a type of cannabis extract that uses butane as

the main solvent. BHO is a term usually reserved for a product that is sticky and has a viscosity a little thicker than honey. Other butane-based extract products are classified by their texture and consistency and include wax, shatter, budder, honeycomb, crumble, or sap. An outdated method of producing BHO is known as open blasting. This method involves loading plant material in a tube and soaking it in butane. Not only is this method quite dangerous, it is also very wasteful. Most of today’s BHO products are made with a closed-loop extraction system. In a closed-loop system, the butane is held in a pressurized tank that is attached to the extraction tube where the plant material is housed. Aside from increased safety, the biggest advantage of a closed-loop system is that the solvent can be reused.

Carbon dioxide behaves as a gas in the air at standard temperatures and pressure. When the pressure and temperature of CO2 are increased over what is known as the “critical point”, the CO2 will have properties between a gas and a liquid. This “supercritical” form of CO2 is used to make a highly potent and safe to consume cannabis extract. Supercritical CO2 cannabis oil production requires the proper equipment. A supercritical CO2 device made specifically for cannabis extraction will have a liquid CO2 storage tank, a compressor, a heating element, a separator, and a condenser. After the extraction process, the CO2 pressure is released and the remaining liquid CO2 molecules convert back into a gas, which then evaporates into the atmosphere leaving behind no chemical residuals. The most sophisticated supercritical CO2 extraction machines will even recapture and reuse the CO2 gas as it evaporates.

Rick Simpson oil is named for the man who created the extraction process in order to cure his own cancer. Rick Simpson oil, or RSO, is a solvent extract that is very popular among medical marijuana patients. RSO is most effectively made with lab-grade naphtha, but is also commonly made with ether. RSO is made by cooking cannabis down in a solvent to make highly concentrated oil. RSO can be smoked, ingested, or applied directly to the skin. The solvents used to make RSO are very flammable. Again, most solvent-based extraction methods are best left to professional cannabis processors. 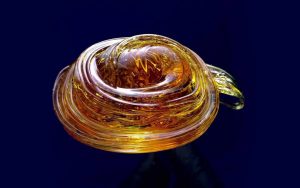 Making cannabis distillate is an extraction method that employs molecular separation. What makes cannabis distillate so special is that the process allows cannabis technicians to separate the cannabinoids and terpenes from the plant material with minimal thermal degradation. The vacuum levels of this process allow the distillation of normally high boiling point products to occur at moderate temperatures. What this really means is that the plant material is not exposed to high temperatures for very long, which equates to less of the valuable compounds being degraded by the heat. Cannabis distillate is one of the most popular and highest potency cannabis extracts currently available.

There is no telling what cannabis extracts will be developed in the future. As the laws surrounding cannabis continue to move toward legalization, more and more extraction methods will certainly be developed. Non-solvent extracts offer a hobbyist the opportunity to create his or her own concentrated cannabis products at home without the risk of flammable or potentially dangerous chemical residuals. Solvent-based extracts, when done by a professional, offer some of the most potent and effective medicines available to medical cannabis patients. The ever expanding list of available cannabis extracts is impressive and will continue to provide viable options to both recreational and medicinal patients who wish to choose the method of consumption that best fits their personal desires or needs. 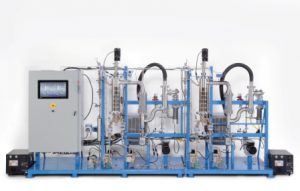 mounted systems, complete with all components such as vacuum and liquid pumps, valving, vessels, traps, heating and chilling, instrumentation and computer/PLC control for full automation. Pope Scientific’s smaller scale 2”, 4” and 6” wiped-film molecular Cannastill packages are well established for high performance purification of cannabinoids, regardless of which extraction method has been utilized. The same high quality and yield of cannabinoid product is obtained in the industrial duty production systems, though with greater throughput, due to scalability of the Pope design.  Systems capable of continuous feed rates to beyond 100 kg/hr are available. Such equipment from Pope has been proven and provided to a wide range of processing industries worldwide for over 35 years. All systems are manufactured in Saukville, Wisconsin, USA. For more information call 262.268.9300, Email sales@popeinc.com or visit PopeCannabisDistillation.com.